“If we are not prepared to defend a tolerant society against the onslaught of the intolerant, then the tolerant will be destroyed, and tolerance with them .We should therefore claim, in the name of tolerance, the right not to tolerate the intolerant.” – Karl Popper 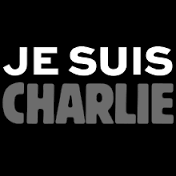 In this era of difficult times where tolerance seems to be waning through the civilizations across the world, cartoonists at Charlie Hebdon were Parsian Intellectuals who not only held strong views but also took their satire seriously. A low circulation weekly had its own share of devout readership which was its source of revenue. Though many may not agree with their description and posters, French Philosopher Voltaire rightly said “I disapprove of what you say, but I will defend to the death your right to say it”

As a tribute to the cartoonists who used the designas a medium to convey their powerful opinions in such an innovative manner, D2V would like to highlight some of the faces behind this weekly: 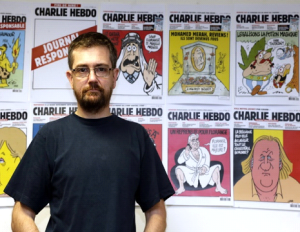 “Maybe it’s a little pompous to say, but I’d rather die standing than live on my knees.” – Charb

Stéphane Charbonnier known by his pen name of Charb was Director of Publications at Charlie Hebdon since 2009, having joined the magazine in 1992, and had a column which went as “Charb n’aime pas les gens,” or Charb doesn’t like people.

Depiction: – Rabbis mutilate jewish children by cutting off the tip of their dicks ! – At least, priests are civilized ! – Yeah right, they don’t cut off children’s dicks, they just ass rape them ! – Demon !

Charb’s comic strip Maurice et Patapon arose from the trial of Maurice Papon, a French Nazi, who was convicted of crimes against humanity for his participation in the deportation of more than 1,600 Jews to concentration camps during World War II, when Papon was secretary general for police in Bordeaux. In the cartoon, Maurice is a dog – described by the newspaper Libération as leftist, pacifist, outgoing and omnisexual, while the cat Patapon is conservative, violent, asexual and perverse. 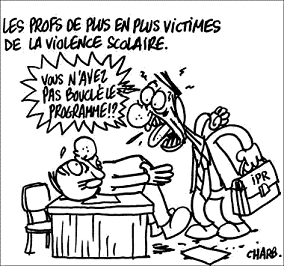 Depiction: Teachers are increasingly the victims of school-based violence. School inspector: “What do you mean you didn’t finish the course?!”

Born on the January 13, 1938 at Châlons-sur-Marne.
By the age of 13, he was drawing for the school news sheet, as well as for the local daily, L’Union and worked for them until 1961. At the age of 19, he drew his first page for Paris Match. On his return from military service in Algeria, he participated in a satirical magazine called Hara-kiri from 1960 to 1983. But it was while working for Le Figaro, between 1966 and 1971, that he created the famous courtroom sketches of the Ben Barka trial. 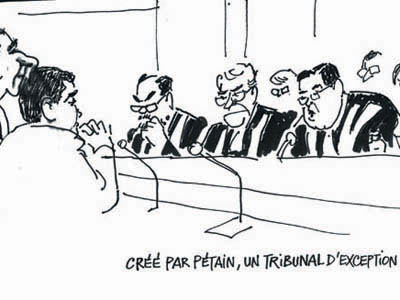 From 1977 to 1987, he took part in the TV programme Récré A2. After the first life of Charlie Hebdo from 1970 to 1982, he re-launched the title with some friends in 1992, and he still worked for Le Canard enchaîné.
Le Grand Duduche was among Cabu’s most popular fictional characters. One of Cabut’s recurring characters was the, a skinny, blond schoolboy bearing some resemblance to Cabut himself.

Cabu sketches are very simple with clear ideology in them. Illustrative curves with humorous ways of presenting things, his cartoons involved significant interplay of characters.

Depiction: French cartoonist Cabu is honored by a retrospective show at the Hotel De Ville, Paris. His sketches of the people & streets of Paris are delightful

Depiction: Banner -the woman is the future of the fanatics Below – has not hit my veil 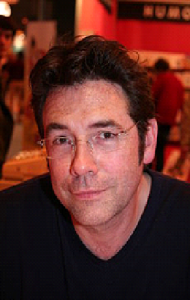 Real name – Bernard Verlhac. He contributed to the weekly news magazine Marianne and the monthly Fluide Glacial along with Charlie Hebdo. His published works included “Pandas in the Mist” and “Five Years of Sarkozy”.

He was member of a group of artists called Cartoonists for Peace and also belonged to the Press Judiciare, an association of French journalists covering courts. He sent his last drawing – a self-portrait wishing Happy New Year – to the association the night before his death.

Depiction: “What does ‘transference’ mean?” “It’s when your money arrives in your therapist’s account”

His works’ significance lies in the flow which has depiction of characters involving Satire with well-balanced illustrative.

Born in Tunisia but moved to France as a schoolboy. By the age of 26, he was working for Hara-Kiri. He had also been the editor-in-chief of the monthly magazine Charlie Mensuel.

Georges Wolinski, 80, was another of Charlie Hebdo’s veteran cartoonists. His works have had appeared in Hara-Kiri, Paris Match and numerous other publications.

He was awarded the Legion of Honor, France’s highest decoration, in 2005.
He also contributed to Paris Match, Le Nouvel Observateur and Paris-Presse.

His works’ are satirical with humorous way of involving the characters lively.

Depiction: “To think, 40 years ago I was up on the barricades…” “Try do forget all that, Dad”

D2V mourns with the world, on this unfortunate demise of such great assets to the design world.